In reality, there is no one ‘correct’ way in which we can hope to engage all children throughout an entire lesson. However, in choosing and designing activities, and in launching these activities, teachers should try to provide multiple access points to the relevant material, supporting the expectation that all children are able and expected to participate.

Where possible, teachers should use open-ended questions or tasks that allow students to approach it by using different processes or strategies. This, in turn, allows students at different stages of mathematical development to offer responses. To explore some open-ended, three act,  maths tasks and to see how they could be used in the classroom visit makemathmoments.com.

The following checklist will help to guide teachers in providing multiple means of engagement in mathematics lessons.

Where possible, mathematics tasks should:

We will now analyse some video clips of mathematics lessons, with respect to the above checklist.

Before continuing please take time to review the ‘Learning from Video’ section of the Maths4All website.

In this video clip, second class students have been introduced to an algebra activity related to growing patterns.

With reference to the following questions, consider the approaches used by the teacher in providing multiple means of engagement.

In this clip, the teacher presents the children with a growing pattern, as shown below. 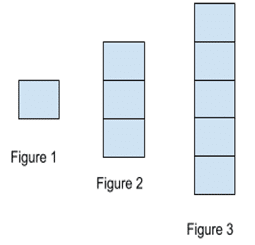 The teacher invites the children to discuss what they see with their partner. Collaboration and communication are promoted from outset and the children are informed that “nothing can be wrong” in their observations or comments about what they see.

The images presented to the children are clear, and the open-ended nature of the task means that all students are able and expected to participate. While some children are initially unsure of what they see and what they are expected to do, the teacher reassures those children that she is simply interested in hearing their ideas. This removes any threat or cause for anxiety and promotes a sense of autonomy among pupils. The teacher reinforces the idea that the students’ own individual observations are worthwhile and valued.

Conversation and communication are evident as the children work in small groups. There is also an eagerness among pupils to share their ideas when the teacher asks them to.

One of the goals of this lesson is that the children will:

During the shared discussion towards the end of the video clip, the students propose many observations about the pattern. For example:

Child A: “It’s going up in odd numbers.”

The teacher is accepting of all contributions and in some cases restates and refines some of the language used. It is clear that all pupil observations are valued, and this in turn leads other children, who perhaps have not yet considered contributing, to take a risk and offer their ideas.

In the case of Children A-E, it is clear that they have achieved the initial part of learning goal of describing the pattern in relation to the changes between terms.

Child E on the other hand, displays a strong level of reasoning in relation to the structure of the term in relation to its position number. The teacher is keen to challenge the thinking of this child and in her choice of question wonders aloud, ‘what Figure 4 might look like?’:

Teacher: “Very good…so what would happen with the next one do you think?” If we were to look at Figure 4, what would it look like?

Varying the demands of the task and adjusting the challenge to suit children who display advanced levels of thinking is important in ensuring that these students are engaged and interested in the task. A ‘low threshold, high ceiling’ task such as this is accessible to everyone, with built-in extension opportunities.  While this video clip only shows the introductory phase of the lesson, following on from this the teacher invites the children to examine a new pattern and apply their observations to extend the pattern to predict and describe future terms. The scope for challenge in this problem is great, as the children can be asked to consider what the pattern might look like in the 100th figure. Some children may not reach this level, and for these children, extending the pattern to up to the 10th figure may present sufficient challenge.